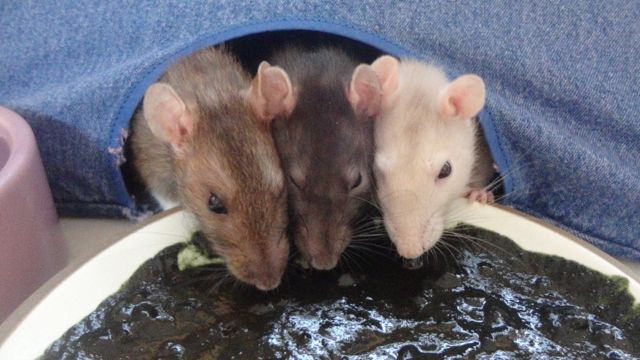 The Rat Refuge:  Our founder, Kim Sheridan, has loved and rescued rats for the majority of her life. Her first rat, Queenie, came into her life and stole her heart when Kim was five years old. Today, she is the caretaker of an enchanted little kingdom of rescued rats. They have their own sanctuary and enjoy a 100% homemade, organic, vegan diet. They often arrive at the Rat Refuge terrified and in very poor health. With lots of love and TLC, they become vibrant, long-lived, ecstatic beings who live harmoniously with one another, regardless of age, gender (they are spayed/neutered), color, or background. We humans could learn a lot from them!

Would you like to know more about our ratties’ vegan diets? Read an interview with Kim Sheridan on the subject by clicking HERE. Please also scroll to the bottom of this page for information about our Rattie Superfood, Green Mush™.

To read more about Rat health, nutrition, and more, visit the Rattie Q & A page.

To find how to deal compassionately with unwelcome rodents in your home, please read the Wild Rodent article.
To find out how you can adopt a rat or other animals, please visit the Adoption page.

So there they were. A large boa constrictor and a little white rat, curled up together, sleeping. They looked like they could be best friends. The only problem was that the rat was supposed to be lunch. He had been in the aquarium with the snake for nearly two weeks. But the snake just wasn’t hungry. Meanwhile, the rat was starving, and the snake’s caretaker wasn’t sure what to do.

“Would you like a rat?” she asked me, having met me once before while I was running errands with one of my pet rats (or rather, rat companions). I’ve had many rat companions ever since I was a child, and I can’t imagine life without them.

As the woman told me the story of the snake who wouldn’t eat the rat, my heart went out to the rat…and to the woman (and to the snake, for that matter). The rat was in danger of either starving to death or being eaten alive; the woman was torn up about having to make weekly trips to the pet store for live, terrified rats in little paper bags; and the snake was tired of worrying about lunch biting back. (The rat had apparently already bitten the snake in the nose; in his shoes, I’d have surely done the same thing!) The snake had been entrusted to the woman by a friend who had moved away, and the woman had promised to take good care of the snake. She’d had no idea what she was getting herself into.

As soon as I shared the story with my husband, we jumped into action. Being long-time rat lovers and rat rescuers, we knew we had to do something fast. While my husband quickly computed on his calculator how many thousands of rats would have to be used as “feeders” over the course of that one snake’s lifetime, I called everyone I could think of who might know of a less violent way to feed a snake.

Sure, snakes eat rodents in nature, but this wasn’t nature. This was a pet in an aquarium where the prey didn’t even have a chance. No chance to live their life first, and no chance to escape their predator. They just had to sit and await their demise, often with a lot of time to think about it first. I don’t think that’s what our Creator had in mind. No survival of the fittest or natural selection was going on here; whereas in nature, often the predators go after the prey who are already sick and going off to die, serving as a sort of euthanasia.

When some of the people I talked to tried to pull the “snakes eat rats in nature” excuse on me, I politely reminded them that wild canines and felines eat rabbits in nature, but that doesn’t mean we should be feeding live bunnies to our family dogs and cats. Part of domesticating an animal involves domesticating their diet, as they are no longer a part of nature. Why should rats be the only exception to this rule?

Well, finally I got some good advice from a fellow rat lover: Snake Steaks, a frozen snake food (not ideal, but a step in the right direction). So my husband and I grabbed a small travel cage, ran to the local pet store for some Snake Steaks, and headed over to the snake lady’s house to strike a deal.

“We’ll take the rat off your hands‚” I began, “if you’ll promise to feed the snake this snake food instead of live rats.” I then showed her how to make the Snake Steaks wiggle with soft tipped tongs, and she accepted the deal. We coaxed Henry (the rat) out of the aquarium and into a cage, where we had food and water waiting for him. In almost two weeks, he’d had nothing to eat except an old, dried up piece of garlic bread, which he was choking on when we arrived.

Poor Henry was so dehydrated, he drank water non-stop almost all the way home, and then he devoured a hearty meal. When we arrived home, I opened his cage door to give him more food. He looked up at me as if to say‚ “thank you” and then climbed up my arm to my shoulder, where he began grooming my hair, licking my face, and chattering (the rat equivalent of purring). When I carried him over to my husband, he climbed across to my husband’s shoulder, groomed his hair, licked his face, and continued chattering. He made it perfectly clear that he understood exactly what we had just done

Now, a very happy rat named Henry is often seen around town on the shoulder of a very happy person. And I hear that there’s a very happy snake who is thoroughly enjoying delicious meals that don’t bite back.

[Henry’s full story is told in the book, Animals and the Afterlife]